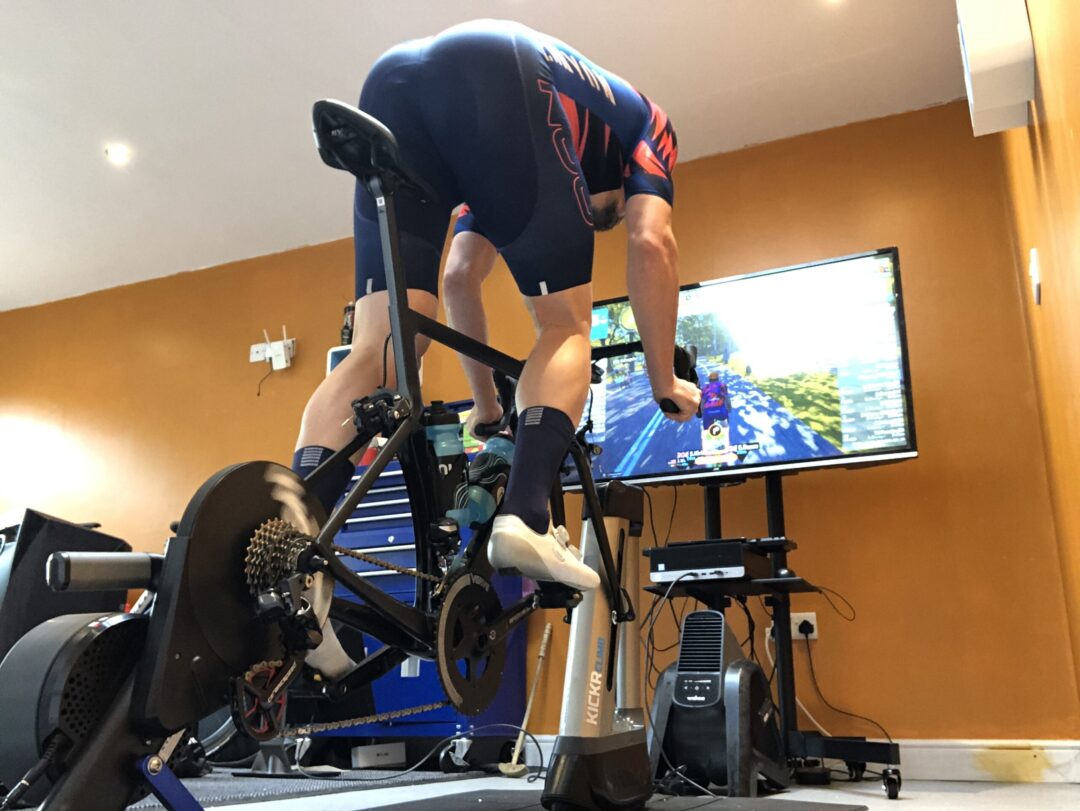 Indoor cycling now incorporates a fully-fledged competitive domain and has somewhat inevitably followed the well-trodden human path of play becoming game becoming sport. The fundamental nature of sport is debated, but it is in part the process of formalising play just enough to preserve both a sense of fairness and the necessary unpredictability of outcome. This process benefits participants and spectators alike, since if the outcome of sport is either predictable or grounded upon inequity then it ceases to be fun, which is the fundamental nature of play.

But to borrow some legal terminology, has this transformation from indoor cycling to virtual racing occurred mutatis mutandis? That is, has all necessary formalisation been considered and included on the road between play and sport?

Whilst high-profile virtual racing events take place in a singular location including both participants and spectators, by its very nature virtual racing usually occurs in a global network of self-funded pain-caves, interconnected by online platforms such as Zwift. This fortunate convergence of technology has enabled a new order to emerge out of the chaos, and in some ways has revolutionised what we think of as cycle-sport. But many participants and spectators are already sensing unease regarding the question of in-race power validation, which threatens to undermine the sport’s credibility.

As in any new market, there is a proliferation of brands vying for market share by creating the best products they can and which they think the participant needs to enjoy his or her pastime. Also as in any new market, there is much that is different between these products and therefore much room for an unintentional reduction in fairness or too much unpredictability to creep back in and erode trust in those at the top of the leaderboard.

It is easy at this point to resort to scientific claims about this and that, but in the spirit of collaboration we can attempt to conceptualise the above challenge in terms we can all agree on. Watts is the unit of power and is the result of measuring objective quantities such as metres and kilograms and then accurately mapping these measurements against time in seconds – legs having both extension (size) and mass and moving in circles at certain speeds are fundamentally analysable within these terms.

There is therefore an objective and correct fact-of-the-matter about how much power a cyclist produces and we can in some sense call this The Truth. Whereas the cyclist experiences The Truth as effort, it is the sports scientist who represents, or more accurately Re-Presents The Truth to themselves mathematically and conceptually.

But if we can say that we’re all interested in The Truth, what then of the variation in numbers displayed by differing power meters? This is sometimes characterised as a difference in degree of accuracy. Yet Accuracy, unless carefully characterised, is not really something that admits of degrees – to say something is 2% accurate is actually in some sense conceptually incoherent. This is because the Accuracy of any stated value relies on the underlying measurements generating those values having two aspects, the measurements must be both:

It is possible for measurements to be True and not Precise, just as my stopped clock may tell the right time twice a day. It might happen to be six o’clock when I check but this is simply coincidence. Equally, it is possible for measurements to be Precise and not True, just as my clock always being set 15 minutes behind, unless I am aware of this I will always be late for my meetings.

Where the Infocrank excels is that its measurements are both True and Precise. To extend the analogy, it is in effect an operational clock that is set at the correct time. When I look at the clock I can know that what I am seeing is an accurate Re-Presentation of The Truth, that is the actual time.

For Accuracy to admit of degrees the way in which the measurements are being taken must in principle be able to converge to True, assuming sufficient sensitivity of the measuring device. Measuring some kind of causally associated yet distant change within the cycling drivetrain (such as deflection in the spider or the tension in the chain) and processing the measurements to generate the power numbers cannot be said to be Accurate, simply because it is not possible in theory for such a measurement to converge to True.

Only when measurements are taken directly, that is of the literal force applied by the cyclist on the pedal down-stroke measured as crank-arm deflection, can the measurement in theory converge to True, and therefore stand a chance of being Accurate. Everything else is some measurement or other run through an algorithm, and this is what you actually see on your graphs, but InfoCranks do not need to conceal the lack of True with an attempt to secure Precise. This is why we can talk in terms of percentage of error from The Truth.

For another view consider the words of Sports scientist and coach, James Spragg, in Cycling Weekly recently: “Before virtual racing came along, power meters needed to be relatively accurate to themselves, to use as a training gauge. As a training tool they work fine. But when you start comparing the values from a Stages crank to an SRM then you start to get issues. Because they were never designed to do that…. Between two SRMs you could have an eight per cent swing. Between two Stages power meters you could have a 12 per cent swing,” he says, referring to data from the 2017 study. This expresses the challenge faced by virtual racing in an alternative way.

Spragg makes a similar point to Verve, but as we have seen already Accuracy has two components, True and Precise. We can therefore see the common misconstruction mentioned earlier expressed in Spragg’s words “power meters needed to be relatively accurate to themselves”, which means on the most charitable reading Precise and which we now understand is only one of the aspects necessary for Accuracy to even be possible. This is why many claims about 2% Accuracy are nonsensical, because they are not being made in relation to The Truth.  Most would now concede that “Accurate to themselves” is synonymous with ‘uniformly and consistently wrong’.

What is needed then is a benchmark, and in virtual racing the benchmark has to be accurate power numbers, or the objective and correct fact-of-the-matter, or simply the Truth. Top eSports team Canyon ZCC chose Infocrank precisely because Verve are in the business of truth, and we are playing our part in preserving the sense of fairness and unpredictability of this new discipline, but we understand that more is needed.

This isn’t a difficult problem to solve, in fact it already has been, but what is required first is helping others to understand what Accuracy really is, not what they are told it is. At Verve we firmly believe that the truth is always out there and rarely any more than one step away if you know where to look. So, back to the original question, has indoor cycling’s transformation to virtual racing occurred mutatis mutandis?  Quite simply, no, but it is happening more quickly with the help of Infocrank.