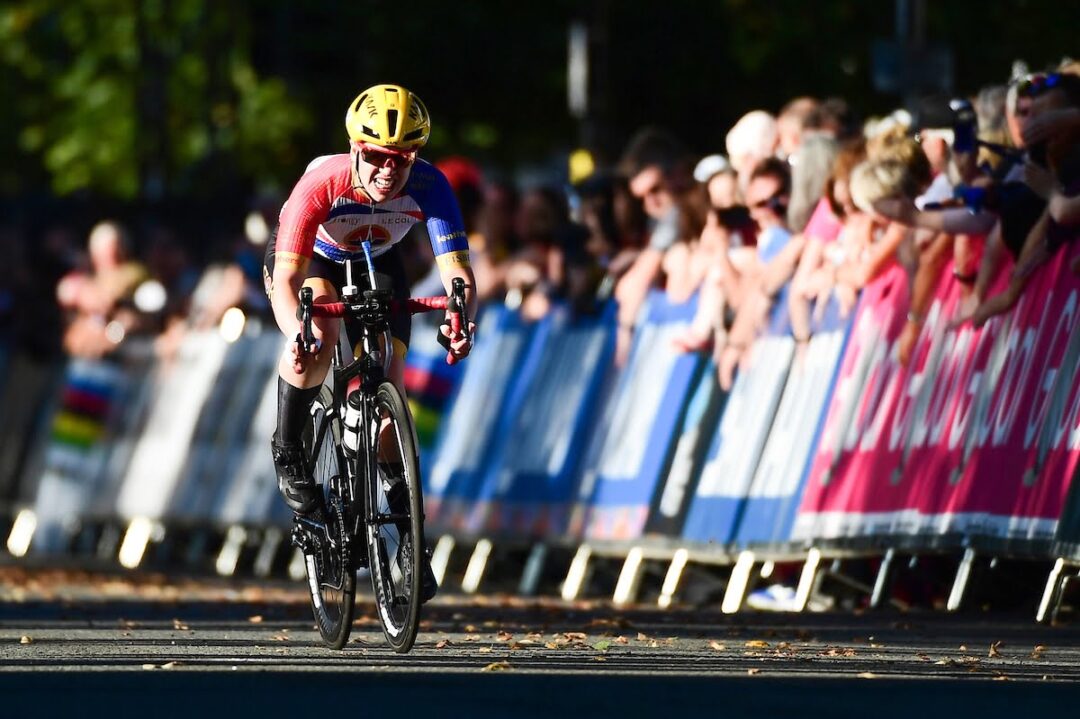 Katie Toft – five-time para-cycling world champion in the C1 class – is an elite cyclist riding for Storey Racing and the Great Britain Cycling Team. Katie took some time out of training to share what it’s like racing internationally with cerebral palsy and what she’s learnt about herself from the experience.

As someone who has raced nationally and internationally for the last few years, cycling has without a doubt changed my life. The people I’ve met and got to know have taught me a lot, often about my Cerebral Palsy (CP).

Cycling started as physio when I was around 10 years old. First came the challenge of riding a bike – not easy when just five years earlier I couldn’t sit on a chair for shaking so much due to my CP. I wanted to learn to ride a two wheeler; that’s what my peers were doing and I had to be the same.

So I learnt to ride; me along with my parents, aunt and uncle, as well as grandparents – very much a family affair. We decided it would be best to learn on grass so that if I fell off, which I did a lot, it wouldn’t be quite as hard as tarmac. Roll on a few years and I am now racing amongst the best para-cyclists in the world. There are still tough challenges to riding a bike though!

I found out pretty quickly that my hand strength wasn’t great. I literally couldn’t hold the brakes any tighter on my road bike and ended up riding up a grass banking and into a wall on my first ever road ride (sorry Brian and Hayley). I pranged the front wheel and had some pretty nasty cuts and bruises. The wheel got changed (obviously) and I tried again and again on flatter routes until after a few rides I started to feel a little bit steadier.

I learnt to ride in cleats – this was great! Like many people I found it a bit odd, as you can’t put your feet on the ground quickly, but now I couldn’t imagine not using them. The advantage is that I don’t need to think about where my feet are, as I struggle with foot stability. The disadvantage is that if I need to put my foot down quickly, it’s not going to happen! Like the time the traffic lights changed on a club ride, I ended up on the floor…

Thankfully, these issues happened a long time ago now and there’s been no more rides where lying down on a road has occurred. Phew! There are, however, still challenges to overcome on a bike.

One issue I’ve experienced is eating and drinking. I can’t ride one handed, so I either have to stop (which I did in my first race) or think of a solution. My first race wasn’t great. It took place at Birkenhead park, I started okay but when I needed a drink, I quickly found that riding one-handed wasn’t going to happen. So I had to stop.

For a while, my parents thought I’d got lost; fortunately I’d found a lovely pair of marshals, so I was having a drink and catching my breath. The marshals helped me to set off and I was on my way again (until the next time I needed a drink… ).

Now, things are very different. I have a bottle system that was made by my dad, which is basically a long straw. The maximum distance for a UCI race for a C1 is 65KM, so having a drink is crucial – particularly in a hot climate like Maniago in Italy where I won two of my world titles.

When we’re training for a race, one of the key skills that British Cycling advises all racers to practice is cornering. Doing it at speed often means you’re leaning on one side; it’s important to have your feet in the right place so your inside pedal doesn’t hit the floor (yes, I’ve learnt the hard way). I really have to think about this and prepare, I do a tick list in my head to make sure I don’t go flying.

As a kid, we used to say I had wobbly legs – I still do but I’ve learnt to think ahead. I use the same roads repeatedly for training, this way I know literally every pot hole and more importantly the surfaces at every junction. By doing this, I know where it is safe to put my foot when unclipping to stop.

If I ride on a new route, my training buddy usually tells me if there is a junction coming up. Mainly because even after years of riding in cleats, I’m still wobbly sometimes so a little more thought has to go into stopping to make sure I’m safe. For me, even though I have CP quadriplegic (all four limbs), the right-side of my body is weaker and less coordinated than the left; this difference also affects how I balance at junction as well.

Due to the imbalance between my left and right side, there is an imbalance of power. Therefore, we use the InfoCrank power meter to keep an eye on the percentage difference; this enables us to keep an eye on fatigue levels, making sure I can get the very best out of my training. CP affects heart rate as it takes extra effort to move around in general, this is because it’s harder to control movement. Therefore, sometimes it’s more appropriate to ride on the turbo as I then don’t need to balance, which puts less stress on my heart and causes less fatigue.

Like all cyclists I have a lot to think about. With the lack of strength and coordination, learning to ride a bike certainly wasn’t easy, taking some tough love from family and friends to make it happen. Racing continues to give me interesting challenges. All in all though, cycling has given me freedom and I can’t imagine my life without it.