Accuracy – From the Bottom Up 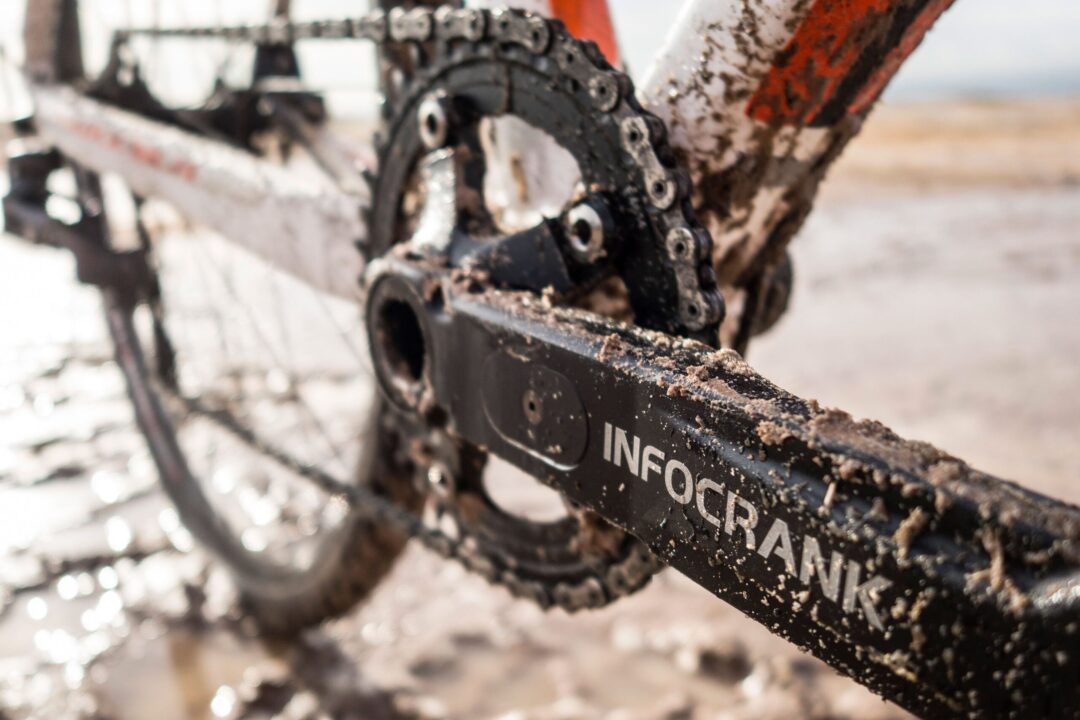 A simple way to look at accuracy is from the bottom up. Most people can intuitively grasp the idea that if the original measurement is not accurate then everything that follows from that is going to have a widening degree of error. Measuring forces, and then translating those forces into a wattage number that so many coaches and athletes find useful, is a case in point.

The InfoCrank is a torque transducer. It measures crank torque 256 times every second throughout the exercise whether the crank is turning or not. The targeted aim of the InfoCrank is to achieve 0.5% error maximum at any revolution, so we can work backwards to find out how accurately we need to measure the torque.

Below is a visualisation of four pedal strokes. There’s one wave for each leg, both with measurements of torque at 256 times per second. For a normal pedal stroke, a cyclist pedals at something between 60rpm and 90rpm. Good cyclists pedal faster with the top track riders often between 150rpm and even over 200rpm.

As you can see, there is a huge range of possibilities that need measurement. In this case, the top torque on a pedal stroke was 86.5541nm and only 0.8secs later the lowest point was recorded on that pedal stroke of -13.0476nm. The measurement has to be within the maximum error margin that entire time and also trace the shape – hence the high speed reading.

If we accept that the electronics themselves will allow some error to creep in, we want to be able to measure torque more accurately than the maximum error allowed, so let’s assume that we aim to be accurate to 0.25 watts.

Firstly, what would most people think that means? For the average cyclist, they would think that if I said the InfoCrank measured to 0.5% accuracy it would mean that if their bike computer showed 200w, then they know that their actual wattage is between 199.5watts and 200.5watts. So to be sure of achieving that, we need to measure the base measurement – crank torque throughout the entire curve of each pedal stroke at a certain maximum level of error.

Since the higher the speed of crank rotation actually increases the wattage error for the simple reason that watts = torque X speed of crank rotation, we need to read accurately at the highest crank rotations and let the low ones look after themselves. Once again, the maths tells us simply that to be accurate in wattage (allowing for error in the electronics beyond the actual measurement) we need to read each torque signal at least at 0.016nm if we assume that the maximum rotation is 150rpm.

A key part of the measurement system is the Analogue to Digital Converter (ADC). The best in the world currently is a 20-bit converter with an ‘accuracy’ of +-5ppm. It is deemed suitable for:

This is the type of product that is needed after precise placing and bonding of strain gauges to read the signals with the accuracy needed to ensure that the wattage errors can remain below 0.5%. Now to put this into perspective. If you wish to buy one of these for each crank, as long as you buy more than 100 at a time, they will only cost about $41 USD each.

Considering that one of the leading selling power meters sells to the bike manufacturers for about $75, you can guess that they are not using top components. By the way, a quick check of the ADC marketplace shows some 8-bit ADC with accuracy at +-2% – sound familiar? You’ll see this claim repeatedly made about power meters that use cheaper components and retail for around $300.

Of course, most people think that it is all in the strain gauges, but that is another story. Not much use using top quality strain gauges if you cannot read with high definition. Which leads us onto the final question, what is your power meter worth? If you want to install more than a gimmick to your expensive road bike (which you have no doubt spent months researching), then spend a fraction of that time understanding the truth of power-measurement and do yourself and the road bike justice.

Read more about the concept of accuracy.